The great ice lolly disaster of 2014.

When the days are hot, like so many have been lately, there’s nothing that cools you down quite like an ice lolly. We’ve been buying them in bulk to help us through this scorching summer (I’m not complaining!).

Of course, when you’re buying these things week after week, it can start to get expensive. So when I was challenged by Sykes Cottages to get creative with my children and come up with our own ice lolly recipe, I thought it sounded like a good idea.

Olivia, William and I set to work. We had grand plans for our lollies. Little did I know that things wouldn’t go according to plan…

We decided to make some ‘traffic light’ ice lollies. We used strawberries, blackberries and blueberries blended together for the red, pineapple for the yellow and apple for the green part.

The strawberry mixture was poured into the moulds first and left to set for about 45 minutes. I made sure it was firm to the touch, but not too frozen because I’d need to push a lolly stick into it.

Then we added the pineapple juice, added the lolly sticks (I used cake pop sticks) and froze it all again for the same amount of time.

Finally, we poured in the apple juice and put the ice lollies back into the freezer where they stayed overnight.

We were certain that these lollies were going to be awesome. 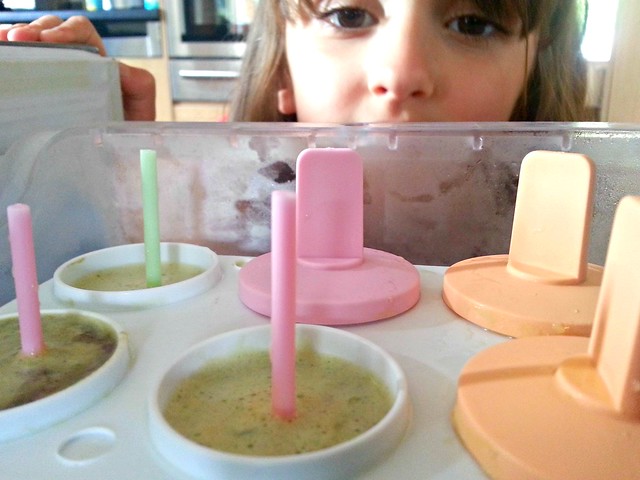 Unfortunately, the ice lollies got stuck in the mould. I ran it under warm water to get the lollies out, but all that seemed to do was to loosen the sticks (I think I used the wrong type – cake pop sticks instead of proper wooden lolly sticks).

And not only that, but the whole ‘traffic light’ idea hadn’t worked. For some reason all the colours had blended together so they looked more like fruits of the forest lollies.

This ice lolly making is harder than it looks!

Next, we attempted chocolate and caramel lollies. The preparation was done solely by me because it involved melting chocolate in a saucepan.

When this mixture was smooth, I added some caramel essence (I used 3 teaspoons of it, but feel free to add as much as you like). Then we poured it into the ice lolly moulds and put it into the freezer.

It took ages – a full day and night – for the lollies to freeze properly. I ran the mould under warm water to help ‘unstick’ the lollies so that they could slide out easier.

And slide out easier they did… off the sticks and into one big gooey, gloopy pile of chocolate mess. I quickly spooned it into 2 pots so that at least the chocolate mixture – which was delicious – wouldn’t be wasted.

And wasted it wasn’t.

We decided to have one last go. This time the idea of creating my own recipe went out of the window in favour of not upsetting my children by making a complete and utter mess of it again.

I opted for a too-simple-to-balls-up idea of lemonade ice lollies. These ice lollies are, and have always been, a favourite in my family. They’re so simple, but refreshing and ‘zingy’.

We bought some cloudy lemonade and poured it into our ice lolly mould. Then we put it into the freezer for a few hours until the lollies had set.

What could go wrong?

It turns out that the third time really is lucky.

We may not have have ended up with a successful, original recipe, but we had a lot of fun along the way.

Our simple chocolate and caramel lolly recipe was the best one that we created. It may not have worked, but it came close. I think more time in the fridge and perhaps a longer lolly stick will help to make a difference. There’s only one way to find out…

Please note: Sykes Cottage provided me with the ice lolly mould, a recipe book for inspiration and a small shopping budget for ingredients to help me complete this challenge. All ideas (and failures) within this post are completely mine and mine alone!