Yesterday, I slaved over a hot stove making a delicious family dinner.

After hours of cooking, everything was ready. I placed William’s serving in front of him.

He took one look at it and screamed.

He got angry and upset. The tantrum was thankfully short this time though, lasting for about 5 minutes.

All because I had dared to put a jacket potato on his plate.

I calmly told him that he didn’t have to eat it if he didn’t want to, but refused to remove it from his plate.

Eventually he settled down, eating everything but the potato. I knew he wouldn’t touch it, but I think he needs to see these foods on his plate, to get him used to the idea of them being part of a regular meal.

Plus, if I never gave them to him, he’d never have the opportunity to try them.

Although I remained calm on the outside, inside my head I wanted to scream with exasperation. Why won’t he try anything new?

Having a child who is a picky eater is extremely frustrating. You want to make sure they get all of their vitamins, minerals, calcium and other nutrients necessary for healthy growth and development, but they don’t care about any of that.

How to sneak fruit and veg into food for your child

We are experiencing a few, slow breakthroughs with William’s eating – a little while ago he picked a cherry out of a sponge cake and ate it without any prompting or pressure, for instance – but they’re not coming thick and fast enough to stop me worrying about his nutrient intake.

He has supplements to make sure he doesn’t miss out on any vital vitamins, but I’ve also taken to ‘sneaking’ fruit and vegetables into his food. It seems that the only way that William will put those foods into his mouth right now is if he doesn’t know they are there.

If you’re also struggling with a fussy eater, here are some ideas on how to sneak fruit and vegetables into food.

These are so easy, but so effective.

Just mix a selection of pureed fruit with yoghurt (natural or flavoured, it doesn’t really matter. Natural is supposed to be healthier though) and milk for a delightfully thick milkshake.

It not only provides children with vitamin D and calcium for strong bones, but also gives the the healthy benefits associated with fruit. 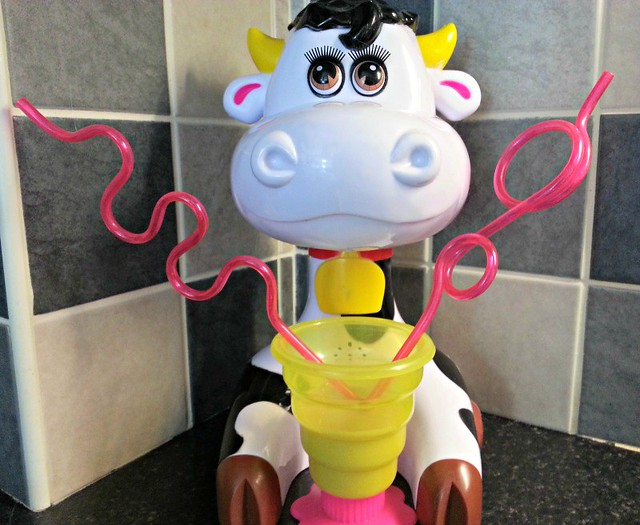 Like milkshakes, smoothies are great for getting a variety of fruits into your child. There’s a wide selection at every supermarket or you can make your own homemade version. I do it by bunging whatever strange combination of fruit I’ve chosen into a blender, whizzing it until smooth and then straining it to remove any last lumps – simple!

Of course, smoothies and milkshakes are great for getting fruit into your child’s diet, but not so much for vegetables. Luckily, the people at V8 has recently launched their new V-fusion range, which combines fruit and vegetables (each 250ml glass counts for 2 of your 5 a day).

I was sent a sample of their raspberry and beetroot juice and it was delicious. Very ‘zingy’ and refreshing. Both William and Olivia loved it – win! 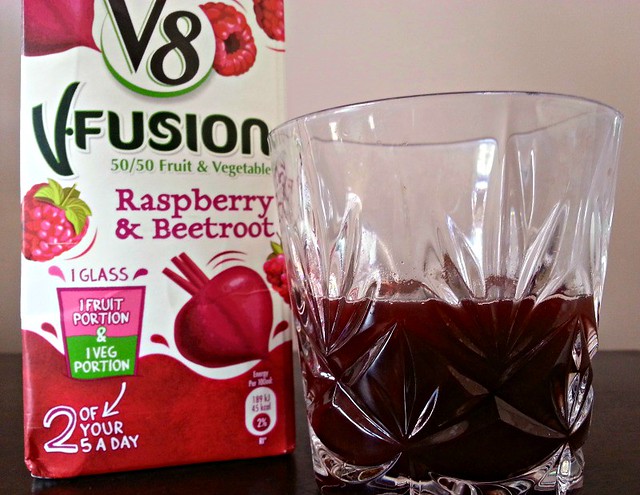 It’s fairly safe to say that anything that tastes like cake is going to go down well with children. Heck, and with parents too. Muffins are great for both breakfast and as a treat during the day.

You don’t have to stick to the traditional blueberry or chocolate chip flavours either. My Daddy Cooks has a recipe for courgette, parmesan and sun-dried tomato muffins and these butternut squash muffins with apples, caramelised onions and cheddar cheese over at Food Blogga sound and look divine.

For a healthy breakfast option, you can also check out my fruity muesli breakfast cakes *cough*.

On the subject of breakfast, make a bowl of porridge even healthier by mixing in pureed fruit. 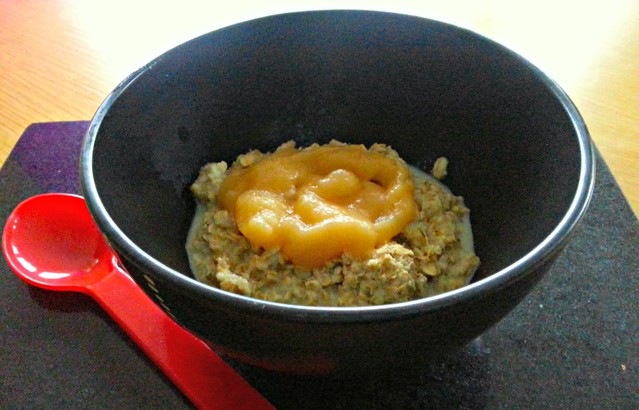 This is an obvious one, but one way to get some vegetables into your child’s diet is to hide them in a cooking sauce.

You can either buy them from the supermarket or finely grind a selection of vegetables in your food processor and mix them into a sauce of your choosing.

Soup is one of those meals that’s easy to make, is completely versatile and can ‘hide’ a variety of healthy vegetables. The key is to puree your vegetables so finely that your fussy child won’t put up a fight.

Melissa d’Arabian has a great recipe for rich roasted tomato soup on the Food Ne2rk website and Mums Make Lists has 50 ideas for ‘easy soups for picky eaters’.

Another obvious one, but it’s something that has worked for me, is to add some vegetables to your mashed potatoes.

William’s a fan of carrot and swede mash (despite the mashed potato turning an orange colour which you would have thought would give it away).

You could also try using other vegetables like cauliflower or parsnip; just make sure there are as few chunks in the mixture as possible. 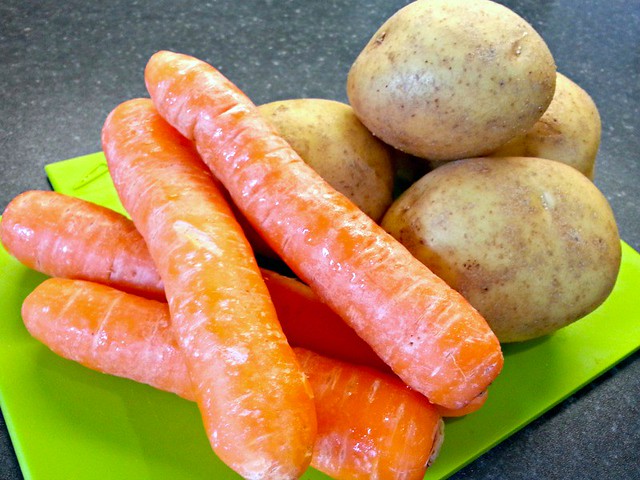 If your child loves a slice of cheese pizza, but won’t tolerate any other toppings, why not try vegetable confetti?

It’s really easy. Instead of slicing your vegetable toppings and laying them over the pizza, finely grate them by hand or, preferably, in your blender. Your child can help to decorate the pizza by sprinkling the ‘confetti’ over the top and you can talk about the different colours (but don’t mention the word ‘vegetables’ – they probably won’t eat it otherwise!).

Hopefully they’ll see this as a fun activity and will enjoy doing this with you, which should then lead to them wanting to try the food once it’s all cooked.

With summer fast approaching, we’re all inevitably going to be spending more time outdoors and in the sunshine. And, if there is one thing that we all love on a hot summer’s day, it’s ice-cream.

The BBC’s Good Food website has a recipe for ‘ultimate vanilla ice cream‘ and you can always take this a step further by mixing in as much pureed, chopped or grated fruit as you like. 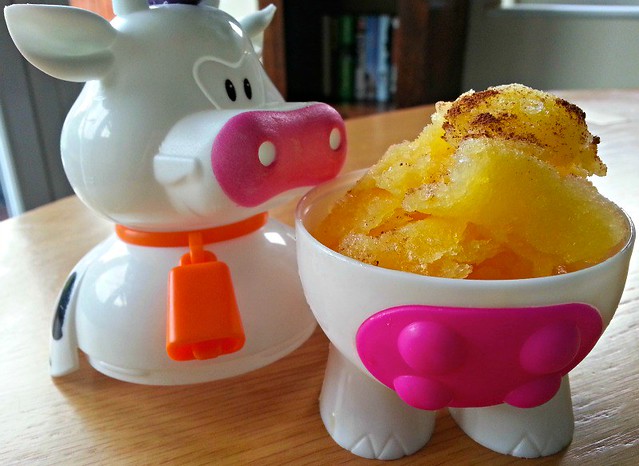 I admit this doesn’t sound terrifically healthy, but there is something to be said for the power of chocolate.

Your child may not like fruit, but they might be willing to put it into their mouth if it’s covered with gloopy chocolate. Even if they only lick the chocolate off the fruit, that’s a start – I’d definitely take that as a ‘victory’.

Do you have any other tips for sneaking fruit and vegetables into a child’s diet?