Ideas to make your party planning a little less stressful.

In some ways it feels like she’s been with us forever – I honestly can’t remember what my life was like before she arrived – yet I’m still amazed at how old she now is.

This year also brought a small birthday milestone with it: we decided it was time to give Olivia her first proper birthday party.

Don’t get me wrong, we’ve had celebratory family ‘gatherings’ before now, but not a full-on, invite-the-whole-school-class kind of party.

I thought it’d be easy, nothing to worry about. If I can arrange a wedding then a child’s birthday party should be… well.. child’s play.

It turns out there are still lessons to be learned, especially if you want to save your sanity.

Here are some tips for planning a child’s birthday party that I picked up along the way.

Set a budget and stick to it.

Sounds like common sense doesn’t it? But the cost of a party can really add up if you let it.

Birthday parties can easily end up costing parents hundreds of pounds, which is fine if you have the money, but not so good if you don’t.

Knowing your budget and planning accordingly is vital. It will dictate everything.

Things to consider include:

A spreadsheet will help you keep track of your spending and make it easier to look at how to balance your budget.

For instance, we placed a lot of importance on entertainment so spent more on hiring professional Elsa and Anna princesses.

To afford this, we saved money by booking our local hall as the venue and roping in Olivia’s older cousin to help with music and party games.

Get your whole family involved.

It’s amazing how many talents and/or contacts family members can have so call in those favours!

As I’ve already mentioned, Olivia’s cousin was in charge of the disco and running party games until the 2 princesses arrived. He has his own DJ equipment so it all looked professional, but obviously cost us much less.

And having lots of family helpers there on the day means that you’re not constantly running around in charge of absolutely everything. ‘Delegation’ is one of my favourite words!

Decorations don’t have to be expensive

It’s so easy to get carried away with ‘setting the scene’ for the party that before you know it, you’ve blown your budget on decorations. This is definitely something I can be guilty of!

But, you don’t need a ton of decorations to have a nice looking party. Some party venues may not allow you to stick decorations onto walls or ceilings either.

With both of those points in mind, I think balloons are a failsafe option when it comes to decorations. They’re bright and fun, children love them and they’re relatively inexpensive.

We chose helium balloons for Olivia’s party, tying them to the backs of the children’s chairs as well as the DJ booth and buffet table.

The balloons themselves were courtesy of a Balloon Time kit, which allows you to inflate your own helium balloons.

Available from supermarkets like Asda and Tesco, the pack included a helium tank, 30 latex balloons and some ribbon.

The tank was very easy to operate and the balloons were inflated within minutes. 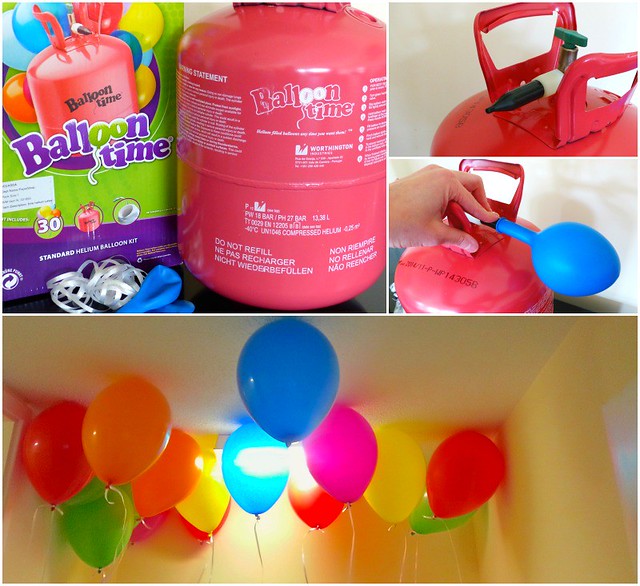 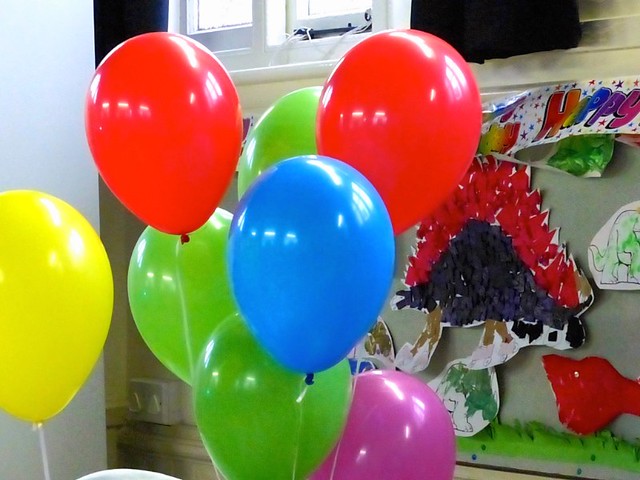 The hall looked so colourful and every child got to take a balloon home with them afterwards, which they all loved.

Don’t just think about the children who are coming

When you’re organising a birthday party for a young child, you need to think about all the guests you’re inviting.

It isn’t just your son or daughter’s friends that will be turning up, it’ll be their parents too. Sometimes siblings will come along as well.

Your party should cater for everyone who’ll be there. For example, make sure there’s enough buffet food for everyone who’s at the party; provide tea and coffee for the adults; and have extra party bags or sweet cones to hand at the end of the party just in case.

Think about how you can involve parents and siblings in your party too. Why not get adults joining in the party games?

I ended up being wrapped in toilet paper to resemble a snowman at Olivia’s party and it was good fun.

Not everything may run smoothly at a child’s party. It didn’t for us.

Half an hour into Olivia’s party we received a phone call to tell us that our Anna princess had gone home sick and our Elsa entertainer was running late.

We needed to think of something which would keep all the children happy until Elsa arrived – and quick!

Luckily, we had a large, movable, ride-on toy reindeer with us so started some ‘reindeer relays’ where all the children took it in turns to ride it across the hall floor.

All of the children thought the reindeer was fantastic and it filled the time nicely until Elsa arrived.

It’s always worth having a plan B.

I have to add here that our entertainer, once she arrived, was brilliant. The delay had been outside of her control and she arrived as quickly as she could.

She glided into the hall already in character and swept the children off their feet (figuratively speaking of course) with songs, games and her own brand of ‘frozen magic’.

What are your best tips for planning a child’s birthday party?

Please note: this is a sponsored post. I’m working with BritMums and Balloon Time as part of the “Celebration Club”, highlighting inventive and fun ways of using balloons.

I was provided with a Balloon Time helium kit and have been compensated for my time. All editorial and opinion are my own.