Christmas is now finally well and truly over for us.  Both sets of grandparents have been seen and all presents exchanged.  It has been exhausting and, I’m not afraid to admit, a little challenging.

Christmas is a wonderful time of year to spoil those you love and the magic of Christmas is so special to see in the faces of children.  But, I think it all became a little overwhelming for our nearly 3-year-old.  Over the last few days we have had fun, frolics…and tears and tantrums.  Merry Christmas indeed!

Don’t get me wrong, Olivia and William have both had a fantastic Christmas.  William, being only 9 months old, displayed his usual nonchalant attitude to it all but Olivia understood the idea of Father Christmas and was very excited.  They have both been well and truly spoiled over the last few days; by Santa on Christmas Day morning, one side of the family in the afternoon and the other lot of family a couple of days later.  Presents came in what seemed like never-ending waves… 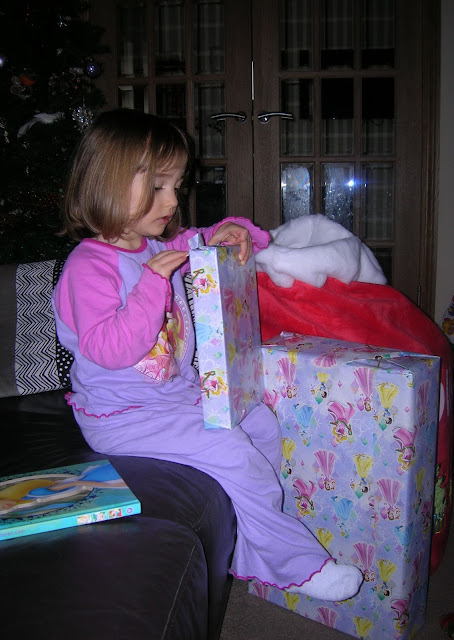 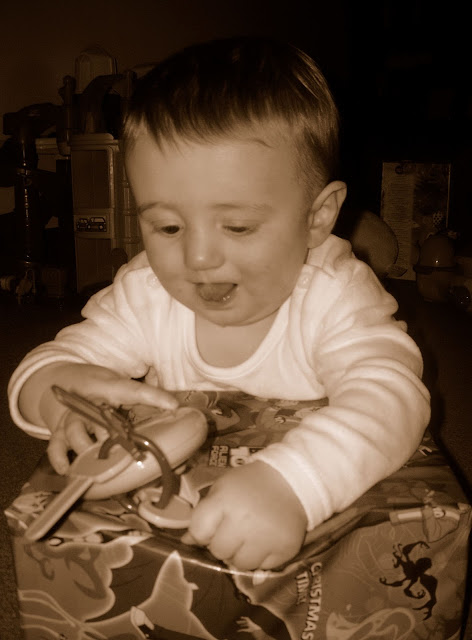 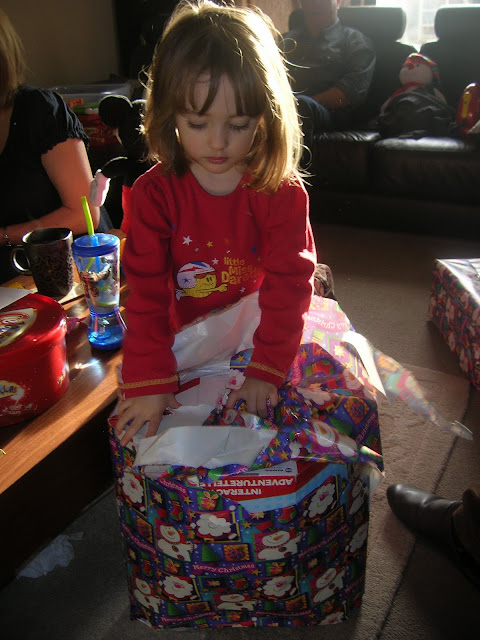 …We now have enough toys to start our own creche!

The problem is there are so many toys lying around that the children don’t know what to play with first, never mind the fact there’s no room to get the toys out properly.  This is very definitely a case of Christmas excess.
And there’s something else.  As I have mentioned, we’ve had our fair share of temper tantrums. There have been times when Olivia has been defiantly uncooperative, sulked, cried and screamed in frustration.  She’s been so spoiled over the last few days that she didn’t enjoy it when she wasn’t indulged. She didn’t want to ‘toe the line’ but instead wanted to do whatever she wanted whenever she wanted.
Yes, I know it’s Christmas, I know it’s a special, exciting time but my husband and I are worried that the huge amount of presents received and Olivia’s tantrums may be linked.  We know children deserve to be spoiled at Christmas – heck, we all deserve to be spoiled at Christmas – but we don’t want Olivia or William growing up to be ungrateful, spoiled and selfish.
Another, more practical problem, is that we don’t have enough space to store all of these new toys.  So, my husband has come up with an idea for next Christmas which should resolve all of these worries; we’re going to place a limit on how many presents each child gets from the entire family (that’s including gifts from Santa too).  We’re not talking about scaling right back, but surely a child will be just as happy with 20 presents than they will be with 30 or more?
To do this, we’re going to change a family tradition and stipulate that Father Christmas will only leave presents at one house from now one – ours.  There’s just no need for Santa to leave a sackful of presents at grandparents houses on top of gifts from Nanny and Grandad.  We’re also going to be quite strict on the present limit we come up with.  For instance, if one set of grandparents goes a bit over-the-top buying gifts for grandchildren, then Santa won’t leave as many presents come Christmas Eve.  Rest assured though, we won’t make the limit too low – we do want our children spoiled a bit!
I want to stipulate right not that we’re not trying to be Christmas grinches and certainly don’t want to reduce the enjoyment that grandparents and others get from seeing the children opening their gifts.  That’s the last thing we want to do.  People could still spend as much as they want on whatever they want.  Perhaps this way, the children will receive slightly fewer presents of really good quality instead of many presents they look at once and then never again.  This doesn’t just apply to friends or family members either – it should also help my husband and I to really think about whether or not to buy certain things, rather than just doing it on a whim and hoping for the best.
It might seem a little early to be making a resolution about next Christmas, but I’m writing it down now while it’s still in mine and my husband’s thoughts.  At least this way, we can look back next December and remind ourselves of the promise we made to ensure our children are moulded into decent, considerate, grateful and unselfish human beings.
Of course, there are many events in someone’s life that helps them to develop into the person they grow up to become.  We know this.  But characteristics can start early and we want to nip those more unpleasant ones in the bud before they can grow into anything more.
Are we being too harsh?  Worrying unnecessarily?  Should children be spoiled as much as possible at Christmas or should we try to impose some boundaries?  I’d love to know your thoughts…
Laura Gibson 29th December 2011