Six gift ideas for children aged 4 years and up.

With only one month left until Christmas, have you done most of your present buying yet?

I haven’t done too badly although I admit I’m waiting for ‘Black Friday’ in the hope of bagging a  bargain or 2.

While Santa obviously organises the bulk of my children’s presents, my husband and I always like to get them one or 2 things from us. I’m finding that now they’re both at primary school, toys are beginning to get a little more sophisticated. There’s so many options out there too, that sometimes it’s hard to decide what to buy.

If you have a primary school-aged child or relative and you’re a little stuck on what to buy them for Christmas, here are some gift ideas to help give you some inspiration.

Here’s an idea for children at the younger end of the primary school age spectrum.

If you don’t know who The Clangers are, where have you been? It’s a stop-motion animated children’s TV show resurrected earlier this year after more than 40 years away from the small screen. Olivia and I were lucky enough to go along to a pre-screening of the show earlier this year and enjoyed it immensely.

The TV show, which is broadcast on CBeebies, is a hit with both Olivia and William (aged four and 6 respectively) and there’s a host of merchandise you can buy too. 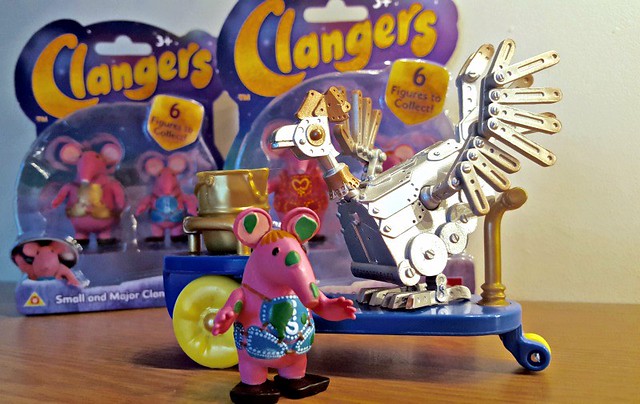 The packaging says that these are suitable for children from the age of 3 and I think they’re just about perfect for four year olds because of their size.

Children can collect the figures and vehicles and create their very own Clangers adventure, which is great for encouraging their imagination and creativity.

The Clangers figures can be bought from the BBC shop – along with even more Clangers merchandise such as ‘squeeze and whistle’ plush toys, DVDs and night lights – and prices start from £4.99 for a pack of 2 figures.

Tap into your child’s ‘va va voom’ with this Hot Wheels track set.

It’s easy to automatically think that a toy like Hot Wheels is something that only appeals to boys, but my daughter certainly never got that memo. Both Olivia and William have been hankering after a set for a couple of months now.

The Hot Wheels Track Builder Spiral Stack-Up track set looks really fun: you build the track into a spiral, place a car at every gate along the track and then launch one car from the top. As cars pass through the gates they may be thrown from the track so you never quite know which cars will make it!

The track can be built in a number of different ways to prolong the fun too. 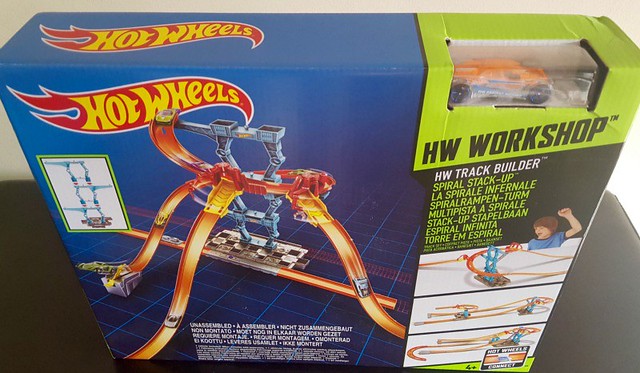 Smart is the new cool with Project MC2.

This doll range ties in with the Netflix show of the same name. It’s about four school friends – Adrienne Attom, Bryden Bandeth, Camryn Coyle and McKeyla McAlister – who work as undercover spies and are also amazing at science and technology.

Both the show and toys are designed to encourage more children, but particularly girls, into science, technology, engineering and mathematics (collectively known as STEM).

Each fully posable and sturdy doll comes with its own experiment like creating a volcano, lava lamp, glow stick or rocket-powered skateboard.

I was sent a Bryden Bandweth doll (with includes a ‘make your own glow stick’ activity). Labelled as suitable for children aged 6 years and up, this is definitely something that will appeal to my daughter. 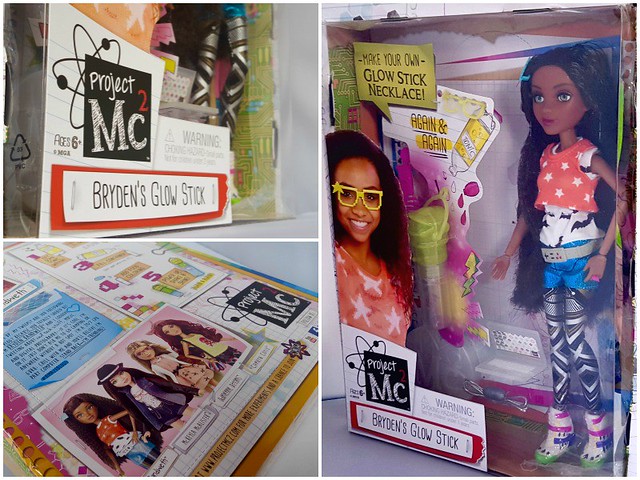 What I like about these dolls is that they are so much more than just ‘pretty faces’. I often tell Olivia and William that they can do anything they set their mind to and toys like this help to reinforce exactly that.

They may be toys, but they offer children a different perspective on the world, celebrating intelligence and curiosity over appearance. Olivia is rejecting traditional dolls like Barbie in favour of strong female role models like this and I think that’s great.

You can buy one of the Project MC2 experiment dolls for about £19.99 from various online retailers like Toys R Us.

Inside Out talking plush figures

Inside Out has to be one of the family-friendly films of the year – well it is Disney after all.

Both of my children loved the film when they went to see it earlier this year and fell in love with some of the characters.

Of course, with every Disney film comes the inevitable merchandise of toys, dolls, playsets and costumes. Inside Out is no exception.

Out of all of the products though, these Inside Out talking plush dolls are a winner for any young fan of the film. 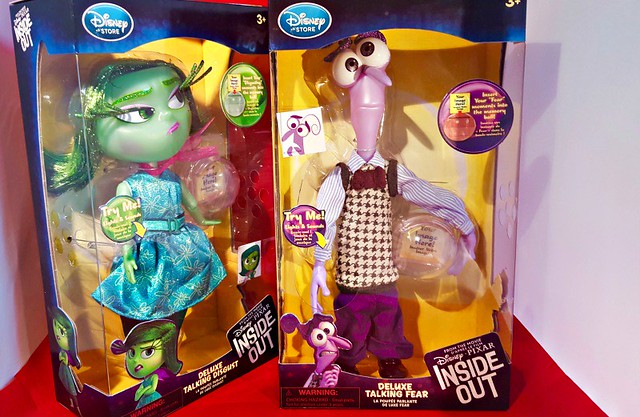 Created exclusively for the Disney Store, these talking dolls all come with a transparent memory ball with space inside to insert your own image.

Each one comes with its own set of phrases built in, which are activated when you touch their hands, and their faces light up when they speak too.

These toys normally cost about £15.95, but the Disney Store currently have some on sale for just £ten – bonus!

Star Wars is everywhere this Christmas isn’t it? The marketing and various brand associations for the new film is staggering.

There are so many Star Wars products already appearing in the shops and these include Star Wars themed playsets for the new Disney Infinity 3.0 video game.

The Disney Infinity series involves collecting special figurines that you place onto a base that’s plugged into your game console. You can play as these figures either in ‘Toy Box mode’ (where you can create a world around you) or in a themed ‘Playset’ (a self contained world based on a specific film or cartoon series where you have to follow a storyline and complete missions).

My children love playing Disney Infinity and I think it’s a fun game for any primary school aged child.

This year, to coincide with the new Star Wars film, Disney has released 3 specially themed playsets for Disney Infinity 3.0: Twilight of the Republic, Rise against the Empire and The Force Awakens. These will be a sure-fire winner this Christmas for any Star Wars and Disney Infinity fan. 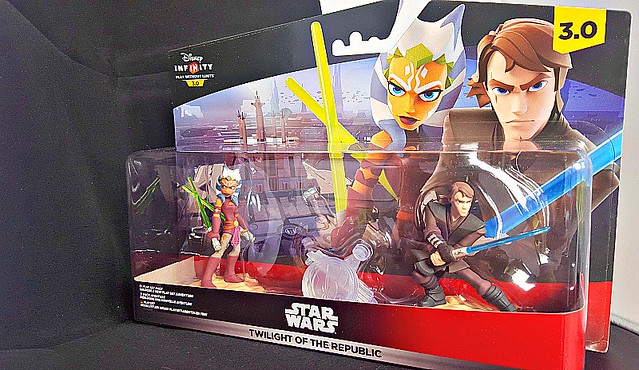 Disney Infinity is available for all games consoles and the new Star Wars playsets tend to cost just under £30. You can also buy individual figures for about £11.99 from online retailers like Game.

Dolls, action figures and games are all very well, but it’s also nice to add some arts and crafts to the mix as well. After all, we know children love getting their hands dirty!

This Jacks Candle Making Kit is designed for slightly older primary school aged children and gets great reviews on the House of Fraser website. 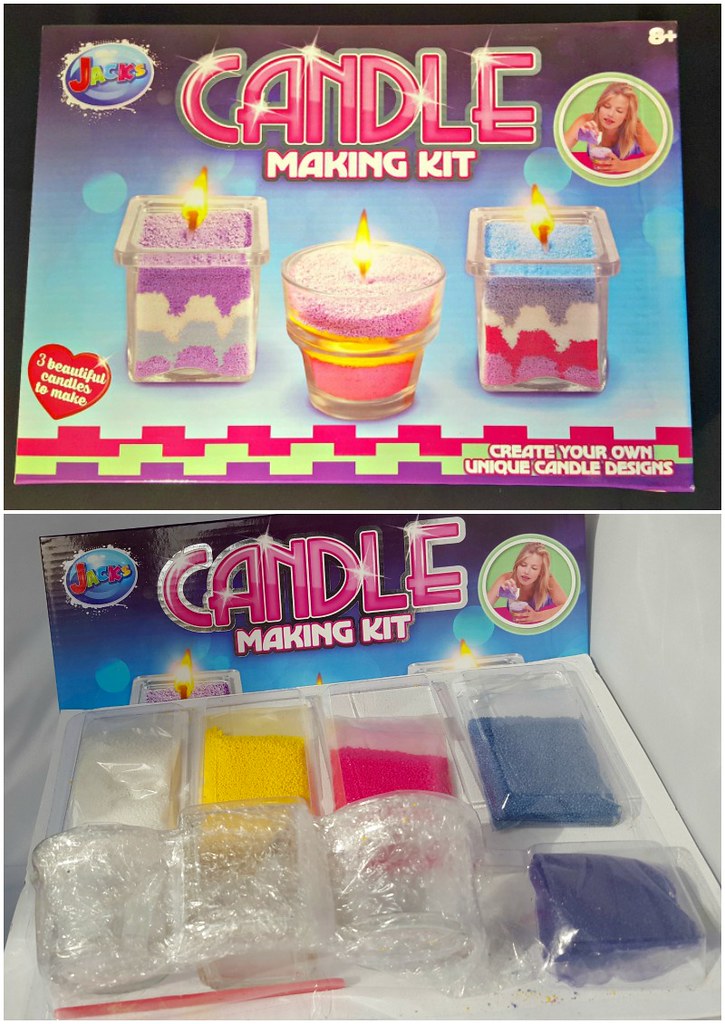 The kit is a steal at £5 and comes with everything you need to make 3 candles, including 5 bags of coloured candlewax, 3 candle wicks, 3 glass containers and instruction booklet.

The makers of this kit says adult supervision is required at all times and it’s definitely a nice activity for parents and children to do together.